Winners share the spotlight at the WSABE 2016 Gala Night

The 26th Annual Western Sydney Awards for Business Excellence (WSABE) was certainly a night of nights with close to 500 guests celebrating the success of a diverse range of businesses.

It was held at Waterview Bicentennial Park on Friday, August 19, hosted by Ricardo Goncalves from SBS World News.

The evening started with prize giveaways followed by an overview of Western Sydney as a key business hub.

NSW Treasurer Gladys Berejiklian, representing the Premier Mike Baird, gave a positive economic overview of the region while Opposition Leader and Shadow Minister for Western Sydney Luke Foley shared his insights of small business and the importance of innovation.

Both congratulated the success of Western Sydney businesses, stating that the region was the engine room of the nation.

“You are all winners,” Ms Berejiklian said, a theme that was carried throughout the night.

The awards, hosted by Parramatta Chamber of Commerce, are judged by a panel of industry experts who give a rigorous appraisal of every company that nominates itself with a detailed account of how it operates.

As it is not a popularity contest, with customer appraisal, WSABE is considered a more genuine assessment of business achievement.

Through the process, companies receive feedback on what they are doing right and what could be done better.

Big winner of the night was young company Sparks + Partners Consulting Engineers, which won The Commonwealth Bank Business of the Year award for overall excellence, as well as SBS Radio Excellence in Small Business and the Westfield Parramatta Rising Star awards. 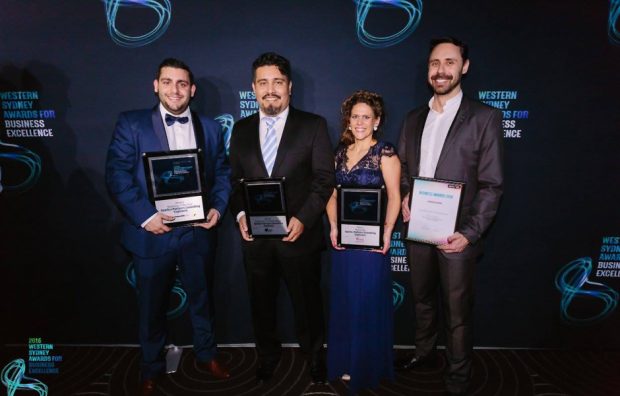 Managing Director Leon Dimino was glowing at the end of evening, telling WSBA that: “I can’t believe we won, this is the best feeling”.

But, given the rigorous judging process, everyone felt a winner on the night. Western Sydney Business Access is a media partner for the WSABE program and publishes the special souvenir edition released on then night.

The other winners were:

Source: Western Sydney Business Access (WSBA) covers the business and community issues of the Greater Western Sydney region of Australia. WSBA is the popular media source for connecting with the pulse of the region and tapping into it’s vast opportunities and networks.